How many types of birds have you had as pets???

Joined Mar 25, 2013
·
55 Posts
Now that i have the rainbows, it got me thinking as to how many types of birds that I've had through my life.
It came to 7. all australian parrots

1st bird.1970's. Sulphur crested cockatoo, that my parents gave away because it nearly bit the tip of my finger off.

5th bird. 2012. Indian ring neck. caught it hanging around house. lost when my granddaughter open the cage door, caught it again but lost it again when an unknown person opened aviary door.

6th bird. 2013. Cockatiel. My mother was given a pair of cockatiels that she did not want so I she gave them to me. the female passed away one night.

I currently have 39 Budgies, 1 cockatiel and 2 rainbow lorikeets.

Joined Jan 19, 2014
·
3,835 Posts
I've had 3 different kinds..
Now and when I was a kid-budgies (I have 11 now)
Lovebirds-I have had 3-2 about 9 years ago, and Sugar who passed 2 years ago, they are great birds.
And cockatiels-Banjo and Whistler (I rehomed them though, they were a bit to loud,my house is very small,I still get to see them they and they are doing great )
J

Joined Jul 24, 2011
·
21,707 Posts
I can't actually give an accurate number as I have bred as well as rescued countless stray pet birds over the years.
I have had budgies, canaries, European goldfinches.

I currently have a flock of 14 birds: 8 budgies and 6 lovebirds, 5 of which are fischer's and 1 a blue masked. Two of them are rescued strays, my budgie Carioca and my blue masked lovebird, Penguin.
R

Joined Sep 7, 2014
·
147 Posts
Had 40 cockatiels 10years ago and two love birds. Then had a blue fronted amazon and ringneck and now have 29budgies and two cockatiels.

Joined Jun 21, 2013
·
148 Posts
Ive had budgies when I was younger. I also had some finches.
Ive had a cockatiels(we rehomed them because I thought my dh was allergic and turned out to be something else).

I currently have the Sun conure, greencheek conure and two budgies

Member of the Month March 2011

But.. I have had budgies on and off since I was six years old.

Got very serious about birds again 2008-9 and got zebra finches (still have them!)
and got a pair of budgies.. there was no turning back after that!
My boyfriend had one cockatiel.. we gave him away, sill miss him.
and got a pair of lovebirds.. they hated us so we sold them..
and I started breeding budgies serious four years ago.
Bought my sweet lovely baby .. Congo african grey girl. I loved her so much, had her only for a year, had to sell her, I was working too much. Miss her so much she was my best friend, I was with her every day! I took a bath with her,she was hangin on my laptop, she knocked on the bathroom doors when I was in there she climbed the bed in the mornings to see me. So cute!
I also had a Red rump for few months.. sold him to my friend he have a great home now!
Maybe year ago.. I got another lovebird.. he hates me and I have two cockatiels.. sadly they are going to another owner after ten days.
Its too expensive to have all those birds
Now I have around 20 zebreas and around 30 budgies. love them! 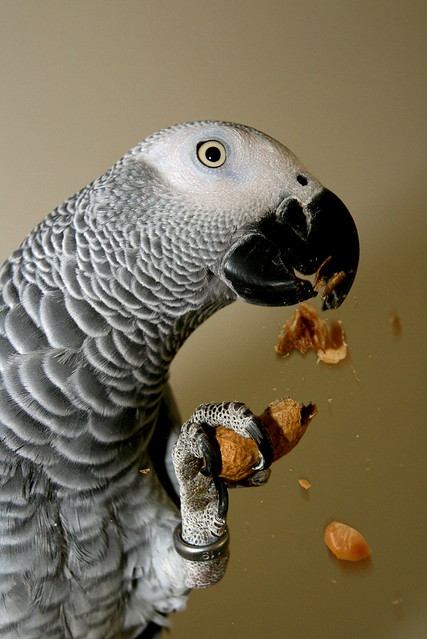 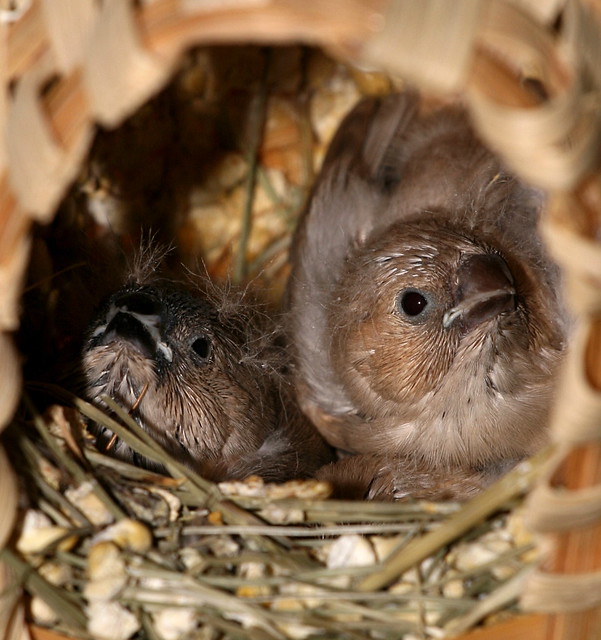 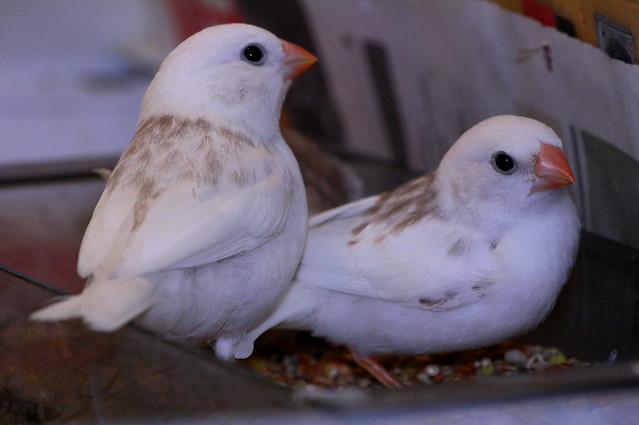 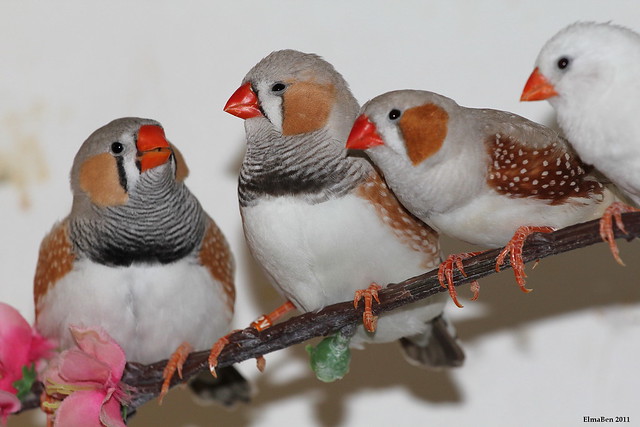 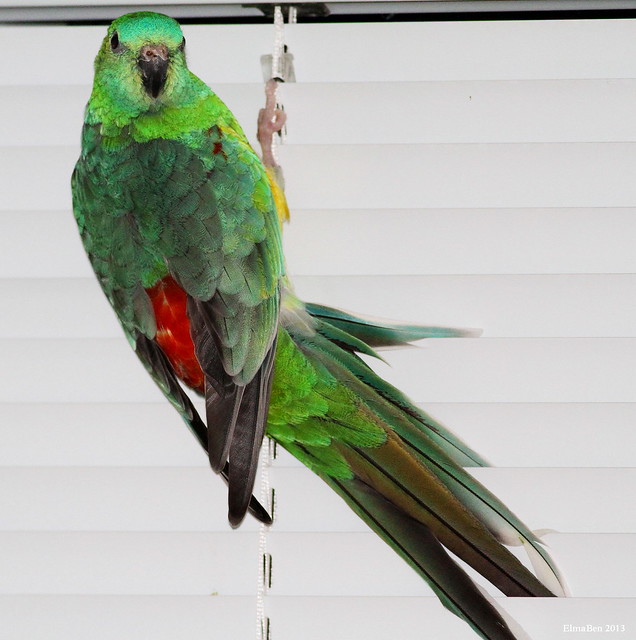 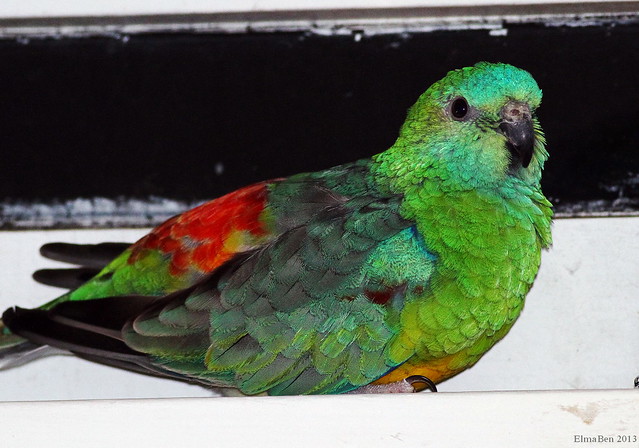 Member of the Month October 2008

Joined Oct 15, 2007
·
6,807 Posts
I have had many types of birds over the years. As a little child my father and I had finches. We had most of the common Australian Finches and a few Bengalese and a few Java Sparrows and Diamond Doves. I have had budgies at various times over the years. Also the odd Sulphur Crested Cockatoo and Galah's and finches.

Many of the birds I have had have been bought to me for hand raising, some from nests in trees that were being cut down, some found on the ground like the pigeon, others from breeders and I was paid in birds for hand raising, some I have re-homed others I have kept. At one stage I had 13 Sulphurs, 14 Galah's, 6 Short Billed Corella's, 7 Alexandrines, over 20 Rainbow Lorikeets all at the same time. I have had to cut down on the amount of birds I have because of ill health. I would just love to have my yard filled with aviaries and all different species of birds in them. Parrots are just such intelligent lovely creatures, I can never get enough of them.

Member of the Month August 2013

Joined Jan 23, 2013
·
5,118 Posts
I personally have own budgies, quails and for a very short period of time a cockatiel. Unfortunately just as the tiel was getting tame it found a window I hadn't latched properly and flew into the wild blue yonder.

However, my extended family have owned, budgies, finches, pidgeons, peacocks, magpies, cockatiels, canaries, geese, quails, and I don't know how many other types, so I do come from bird stock :laugh:

Joined Mar 25, 2013
·
55 Posts
I completely forgot that I've also had pigeons, ducks, chickens, and we had a tame rooster that thought it was a dog.
that makes a total of 10 types of bird that I've owned.

Servant of The King

We had a budgie when I was a kid. I had two cockatiels back in the early 90's. I have four awesome budgies and a tiel now.

I aspire to one day have a quaker...really like the lovebirds at my Father in laws veterans home, wouldn't mind having one or two of those.....and of course, more budgies....
B

Joined Jan 24, 2008
·
1,466 Posts
Indian ring necks are great looking birds. They are hard to come by where I live. There was a shop a couple of miles from where I live that did carry them, but they are not at that location anymore.

Joined Jan 1, 2013
·
37,335 Posts
As a child my family had a twenty eight parrot, a galah and a sulphur crested parrot. I myself have had canaries, finches, and budgies. I have raised a baby kookaburra and released him.
But my grandfather had a huge outdoor bird room that I loved going to visit I have many fond memories just sitting and listening .

I also had ducks, which I used to take inside the house when mum wasn't home I would fill the bath up with water and let them have a bath I used to get in trouble of course but boy I loved watching them make that mess

We also had a lovebird named Dearie.

I've also had a Goffin's Cockatoo and a Green Cheeck Conure.... but unfortunately my ex-boyfriend took those birds with hiim when we broke up.

I also had a Sun Conure for a short while. We ended up taking him back to his breeder, he was much too noisy for my neighbor (we rent a town house) and quite honestly, I was afraid of that bird! Don't ask my why. I was totally comfortable with my Cockatoo, but I was convinced that this Sun Conure was seconds away from taking my finger off.
V

Joined Aug 27, 2014
·
192 Posts
Hi mark im new to birds, but my son has a budgie george and wev had 3 cats in the past but now we have
2 cats boys ozzy and oscar both rescue
1 fish girl crystal alice died
2 african snails gary and Patrick
oh I gorgot 2 sons

Joined Sep 19, 2014
·
579 Posts
I've had budgies, finches, lovebirds, conures, a macaw, and when I was growing up my mother's boyfriend's grandpa had TONS of birds and I "had" a cockatoo I named Cookie. Lol. I had my macaw and conure for a while until we had to move and be in lodging for so long we couldn't take any of my birds with me... which was really sad. I decided to start with budgies again since my daughter and I are settling down now.
1 - 20 of 29 Posts