Joined Oct 9, 2015
·
6 Posts
Hi everyone,
Just joined, a short intro; our dear bird Percy has been with us just over a year, he is male, yellow/green with dark blue patches and scales, he can mimic about 25 words and loves to fly and poop on my bald head. He loves his toys, especially his plastic ball which he carries and dunks it in water, than pulls it tosses to the other end of his cage, then dunks it in his seed container, also loves to sleep next to his ball.

My question is, ever since we got him, I have never seen poop like the other birds (my brother's bird for example) so his poop has always been watery, when he poops on my hand it simply runs off. He does poop close to normal though but almost always watery. Should I be concerned? Visually, his weight is normal and he is always active.

Here is two of his poop next to each other, one is plain water, the other has some solid feces. 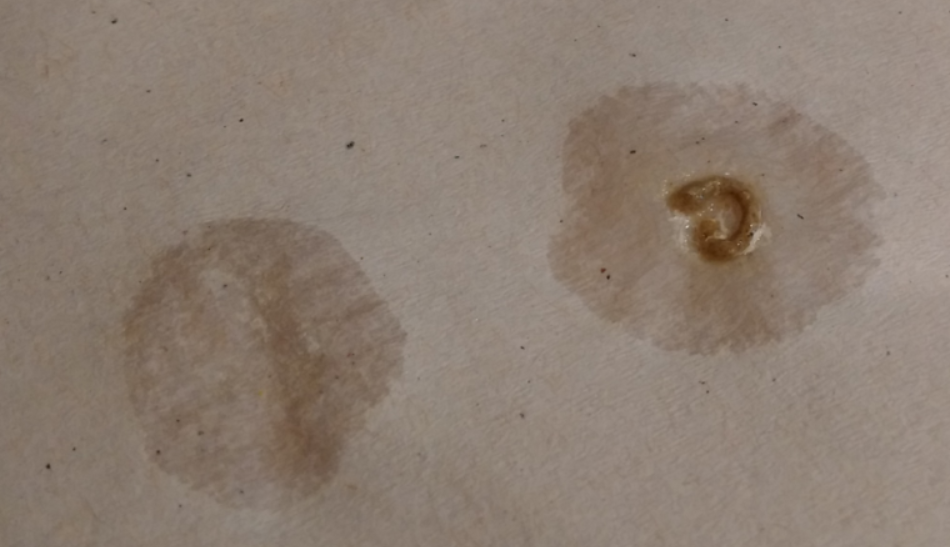 Thanks in advance for any comments/feedback.

In comparison,
I have never seen my budgie poop like this: http://i1218.photobucket.com/albums/dd406/BudgiesBuddy/Sick/4c3ff1dc.jpg ever (my Brother's budgie poops just like this, his is only 2 months old, mine is 1,5 yrs old)

Servant of The King

Joined Feb 3, 2013
·
11,866 Posts
Not healthy looking droppings. You say his weight is good "visually"....have you actually weighed him ? Since this has been going on for awhile I would take him to an avian vet for some testing.

The droppings are not normal.

I would suggest taking Percy to an Avian Vet for a fecal gram stain.
The vet will also weigh Perchy, perform an exam and determine if other tests are needed for a proper diagnosis and treatment plan.

What sort of diet do you have Percy on?
Do you give him ACV as a natural probiotic? (see link below)

I'm looking forward to hearing all about Percy and hopefully seeing some pictures hoto: of him soon!!

If you have any questions after reading through everything, please be sure to ask!

Glad you decided to join us and looking forward to seeing you around the forums.

Joined Oct 9, 2015
·
6 Posts
I have two more pictures from his cage after I replaced the paper, all this poop in matter of about 6 hrs. (except for the stuff on the cage grill, that was already there)

As for his diet, it's mainly Brown's Encore Premium, filtered water (from our fridge), occasional fruit that he nibbles on, and that's about it. He doesn't like anything else, and there were days pieces of other food like fruits and nuts would just stay there for days if we don't remove it. (We usually remove it the next day) He loves to fly to us whenever we are eating anything at all with curious looks, take a bite and then move on.

Could he have C. Difficile? My son was diagnosed with C. Diff and now I am concerned he may have gotten it from our parakeet?

Joined Sep 5, 2013
·
5,754 Posts
Your birds dropping are not normal, only an avian vet would be able to properly diagnose the problem. When you offer fruits and veggies you should remove them after several hours if they are not eaten, they can spoil quickly and be full of bacteria, especially of you are leaving them out a day or more.

Please take him in to the Avian Vet to be properly diagnosed as recommended in the previous posts.

We'll look forward to you posted an update on his condition in this thread once he's seen the Avian Vet.

Joined Oct 9, 2015
·
6 Posts
I took him to our local vet who looked and said the poop looks well formed with just more water but he wouldn't call that diarrhea. He suggested I include more veggies and greens as well as mashed banana and other non-citrus food in his diet and watch. He said Percy is alert, all vital signs are positive and overall he looks to be healthy. I asked him about washing him, he said plain water works just fine.

Should I still be concerned?

If you took him to a regular vet then yes, you still need to be concerned.

An Avian Vet specializes in birds and has more training, knowledge and experience when it comes to diagnosing and treating their illnesses.

An Exotic Vet is the next best option as they generally have more experience with birds than a Regular Vet who deals primarily with dogs and cats.

Did the vet to the fecal gram stain suggested?
Did the vet weigh your budgie?
What does he weigh?
Were any blood or fecal tests performed?

Giving a budgie a healthy diet is always important.
This generally consists of a good brand of pellets, a quality seed mix, vegetables and a little fruit.

Please realize that as you add more vegetables to Percy's diet, because of the high water content his droppings will become more watery than they are currently.

Budgies clean themselves by using the oil from their preen gland and preening their feathers to keep them clean and shiny.
You do not need to wash or bathe your budgie.
You can offer him a bath and see if he likes it.
You can also try misting him lightly with room temperature water to see if he prefers that.
Some budgies like to play under a faucet with a very slow gentle stream of water coming from it.
Some budgies prefer to rub or roll on wet leaves such as kale or romaine lettuce.
Some budgies love water and others do not show any interest in baths, showers or "bathing".
If your budgie prefers not to bathe or shower, that is just fine.

I agree with Deborah, if Percy has not seen an avian vet you still need to be concerned. Please keep us posted! She's given you very good advice in addition.

Percy is a very handsome little guy and we're looking forward to seeing him around the forums and we're all hoping he has a rapid recovery :fingerx:
P

PercyBirdie said:
Thank you both, I'll be seeking an avian vet in the area.
Can we tell if Percy is male or female?
Click to expand...

Oh, I'm sorry -- I thought you would realize from the post when I said "Percy is a very handsome little fellow" that indicated he is Male.
P

Joined Oct 9, 2015
·
6 Posts
I knew he was a boy, the "vet" somehow thought Percy is a female.
Do we have regional forums? Is there anyway to get recommendations on where to find a nice avian/exotic vet?

PercyBirdie said:
I knew he was a boy, the "vet" somehow thought Percy is a female.
Do we have regional forums? Is there anyway to get recommendations on where to find a nice avian/exotic vet?
Click to expand...

Oh dear! If the vet doesn't even know if Percy is Male or Female I certainly would be looking for an Avian Vet right away.

There are no "regional" forums on Talk Budgies.

These links should help you locate an Avian Vet

Bird Vets Near You
Veterinarians.com​
If you'd like to PM me with your City and State I can also try to do some research on line to see if I can locate any near you.
P

Joined Oct 9, 2015
·
6 Posts
Thanks for all the info, this morning I was supposed to take a poop sample, and what do you know, Percy decides not to poop for about an hour while I am late for work (possibly just curious because I laid parchment paper under his cage's grill, so he was pretty curious about it.

I will change the paper in the morning and wait for a fresh sample and take that in for the test. Does anyone have any suggestions on grabbing and storing/transporting budge poop while keeping it fresh? I am thinking of getting the parchment paper from under the grill, cutting around it and putting it into a ziplock bag intact, hoping it doesn't dry too much by the time they do the test.

You could also call the vet and ask how they recommend you transport it.
1 - 16 of 16 Posts