Joined May 6, 2021
·
327 Posts
Hello everyone, Chick seems to be doing much better, the medication is working. She's back to playing with toys and singing, after a few months of being near nonexistent in terms of vocality, and not doing anything with her toys. Her latest craze is spending hours a day chewing into the little tree log I bought for her, so I'm guessing if she has enough energy to do all that hard work, she must be feeling better! 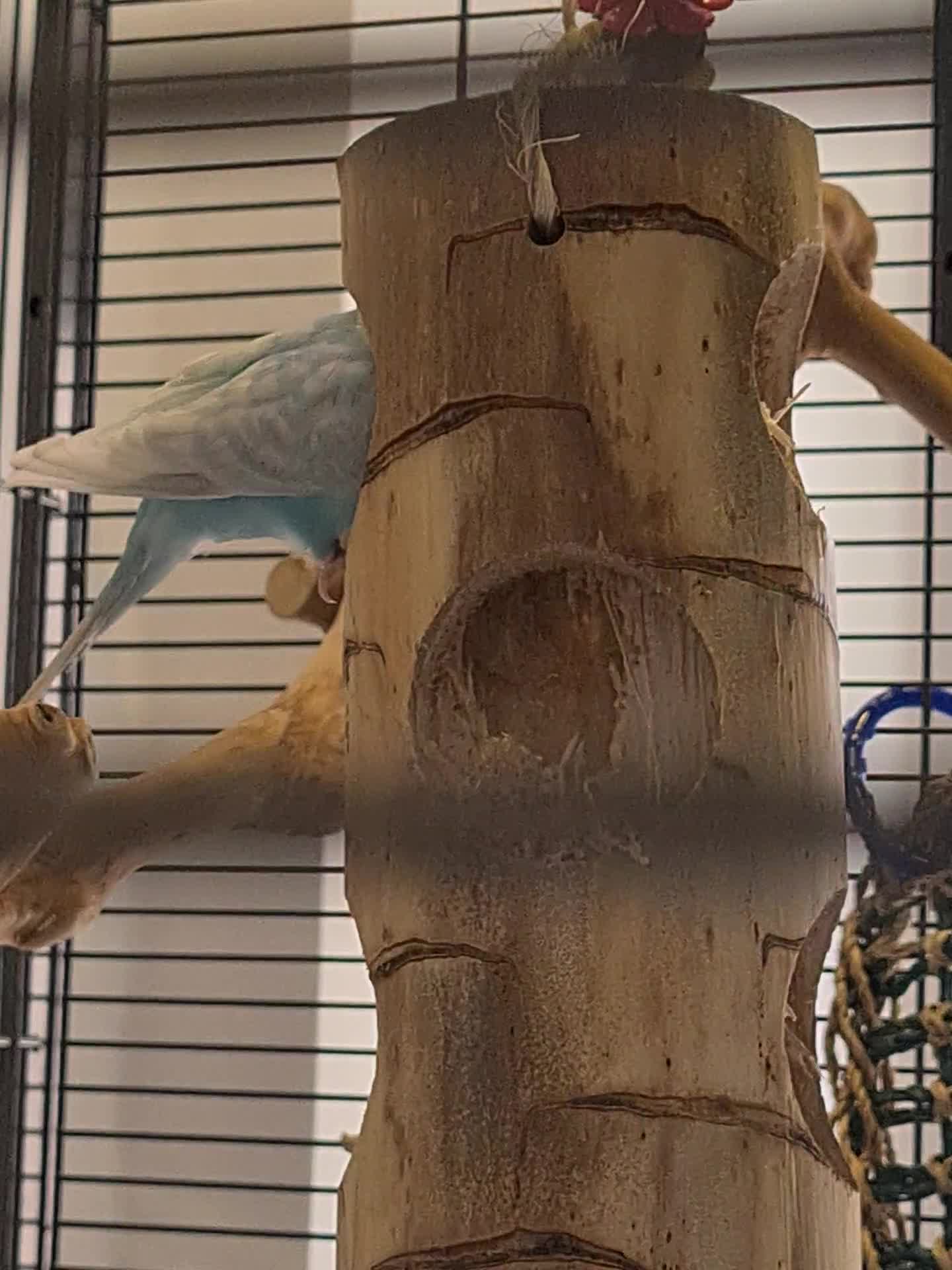 Watch this video on Streamable.

My question is regarding her squawking. She'll do it quite a lot, and for minutes at a time. Now, don't get me wrong, unlike the other guy, her noises don't bother me, she's Queen of this house. The only thing that it does is make me worry, because it's the one bit of her language I can't understand. It comes across as frustration. Why is she doing it? Is it because she's a hormonal little terror? She's currently in full swing of her moult, could it be that? I'll give her all the baths she wants once she's done with her medication course (if I give her a bath now, she drinks so much water from it and won't take the medicated water). Is there something upsetting her or making her angry? 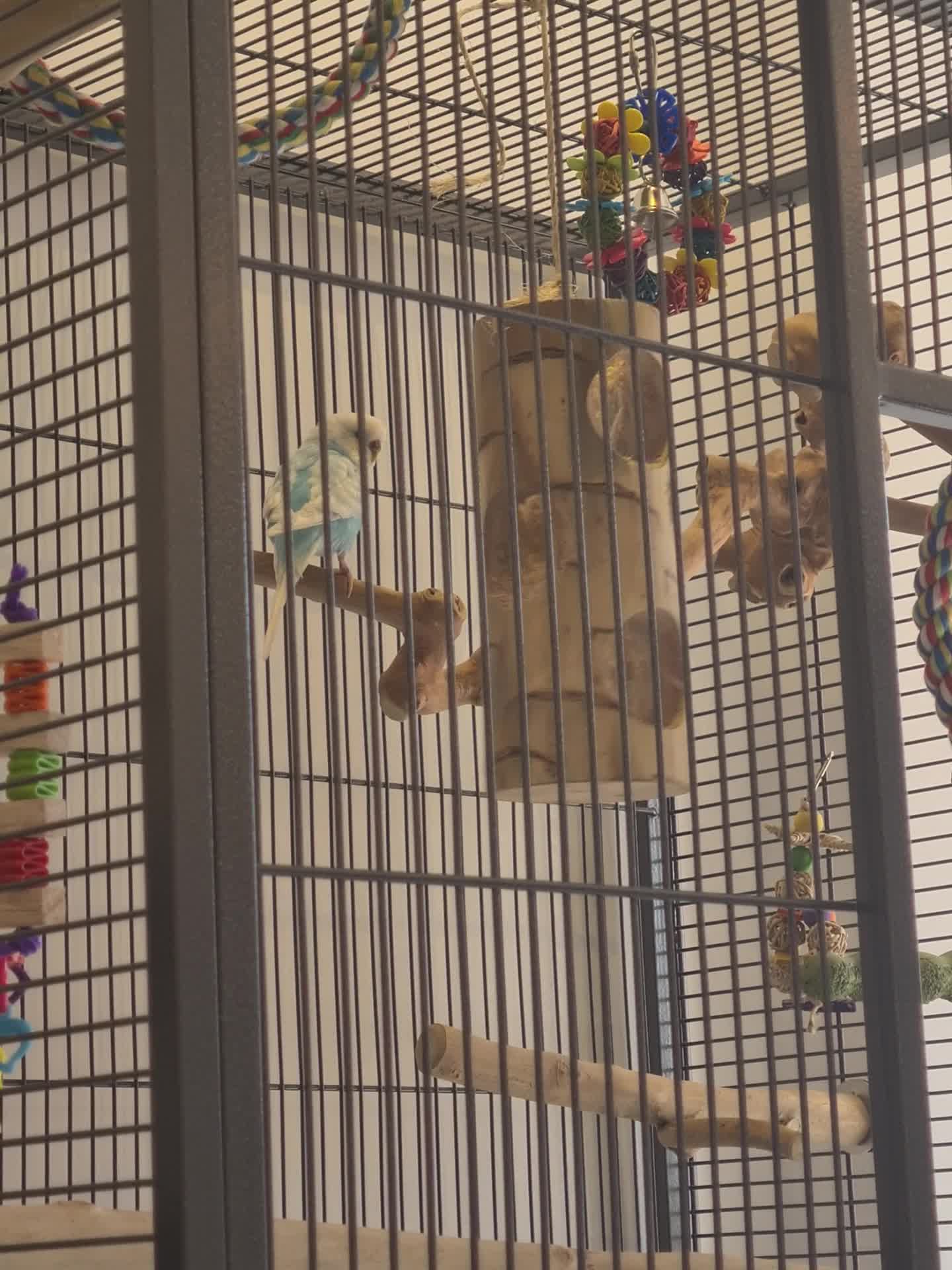 Watch this video on Streamable.

The cage door is open, she's free to come out (though lately she prefers staying inside making holes in the log). So it's not that. Sometimes she'll get squawky if she's locked in and unable to come out to me.

Joined Sep 5, 2013
·
5,428 Posts
That's normal budgie noise, 2 of my girls are doing the same quite often. As much as she like chewing that log I think she may be seeing it as a potential nesting area, are you able to cut it into pieces rather than leaving it as is?

Joined May 6, 2021
·
327 Posts
Okay, I'm glad to hear it's just female budgies being female budgies. It sounded like she was distressed by something but I guess she's just being a drama queen.

As for the log, I'm also sure she's seeing it as a nest. The reason I haven't removed it is because eventually, she'll chew enough of it away that it'll just become an exposed and open log, which she won't want to use as a nest. As soon as she's done chewing through it (which should be a few more days), I'm replacing it with a brand new one. I've used cut pieces of the same wood, but it's a lot more of a hassle, they chew through it within a day and I have to keep replacing it. The log is a set and forget kind of deal.

I know it's not good for her to get nesty, but I feel like the benefit of the log outweighs the negatives: she's getting a tonne of exercise, is wearing down her beak and is having a blast all at the same time. Plus she's in her own cage so there's no risk of her getting territorial and fighting the other female. Are there any downsides to her getting nesty that I didn't think of? I don't think she'll start laying eggs in it, it's too exposed.

Joined Sep 5, 2013
·
5,428 Posts
Egg laying and being territorial are both downsides of being broody, they will lay eggs without a nest, they will just drop to the bottom of the cage and usually break and are ignored by the hen. You don't want her to start laying and turn into a chronic egg layer as that is not good for their health.

Joined May 9, 2011
·
59,173 Posts
For her health and well-being, you really need to remove the log from the cage.
Please try to find a different type of SAFE shredding toy for her.